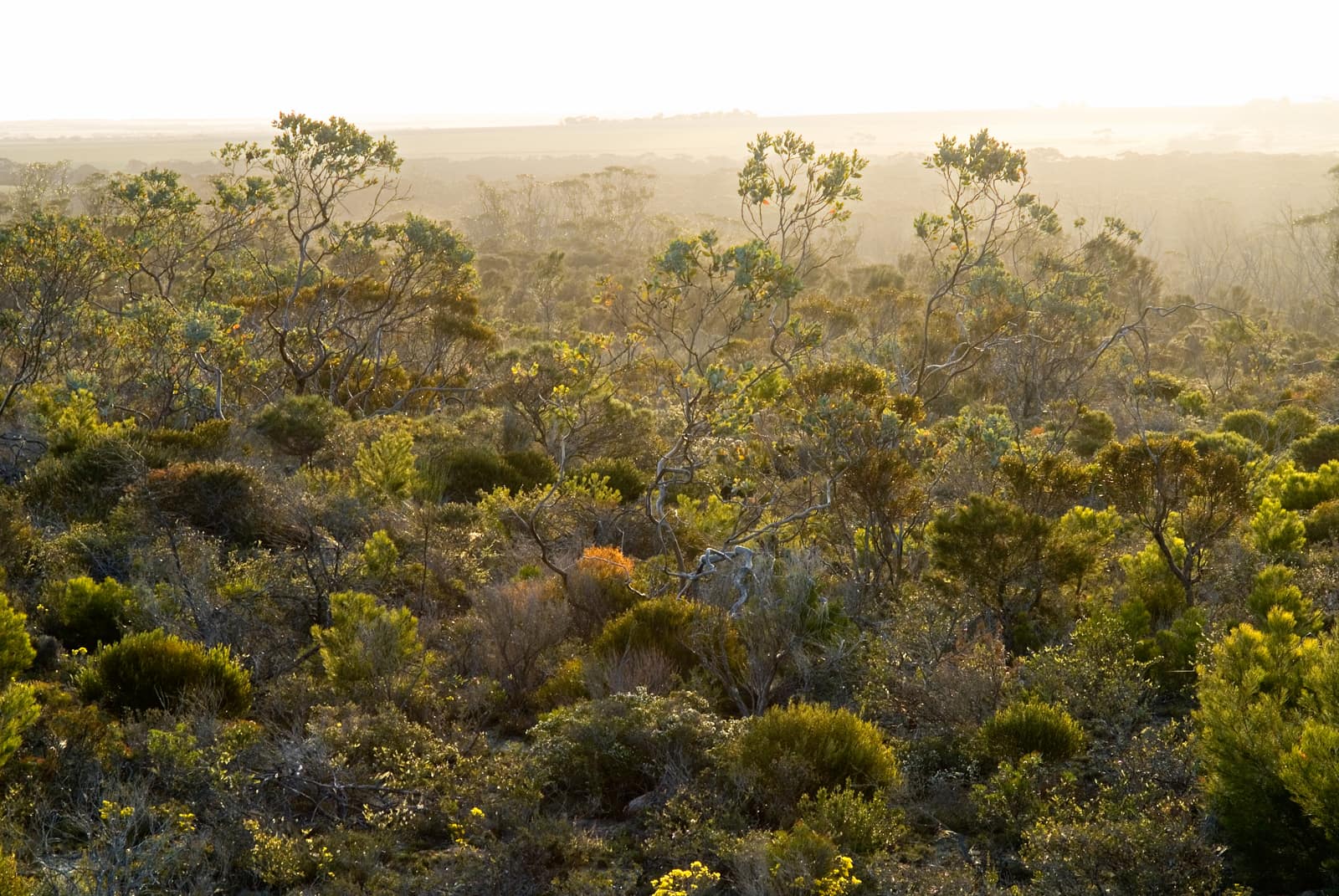 The Noongar word for sandplain is “kwongkan”. Botanists and ecologists adopted this name (although generally spelling it “Kwongan”) to describe the vegetation community associated with sandplains.

Specifically, it has come to mean shrubland that is dominated by flowering shrub species from the Proteaceae family (e.g. Banksias, Grevilleas, Hakeas). As such, the term is also used now to include the shrubland vegetation found on other soils, such as coastal heaths on limestone and granite, and hill thickets on various rock types. While the Proteaceous shrub species define the kwongan, it may contain scattered trees as long as they do not dominate the shrubs and thickets.

Kwongan originally occurred over about a third of the Southwest Australian Floristic Region, and contains 70% of the 8000+ native plant species known from this global biodiversity hotspot (Beard and Pate 1984; Hopper and Gioia 2004).

Nearly half of these species are found nowhere else on Earth, making kwongan significant both nationally and internationally. 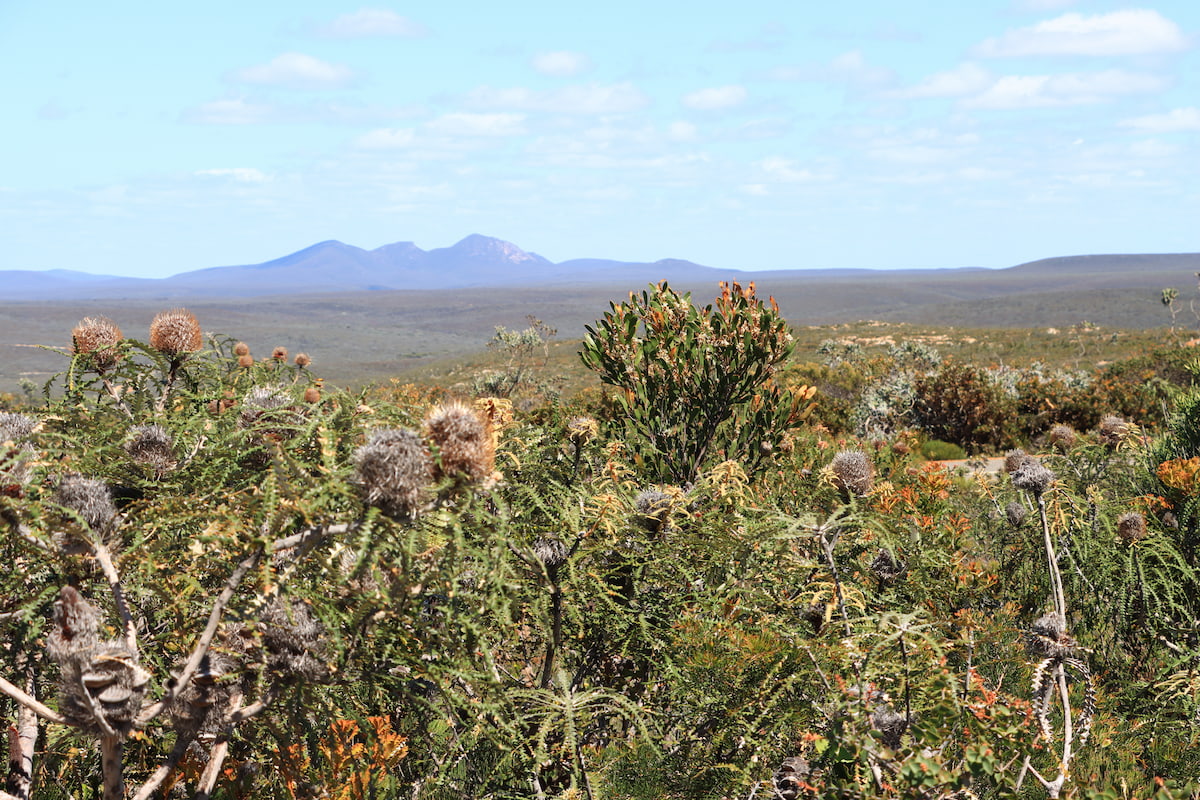 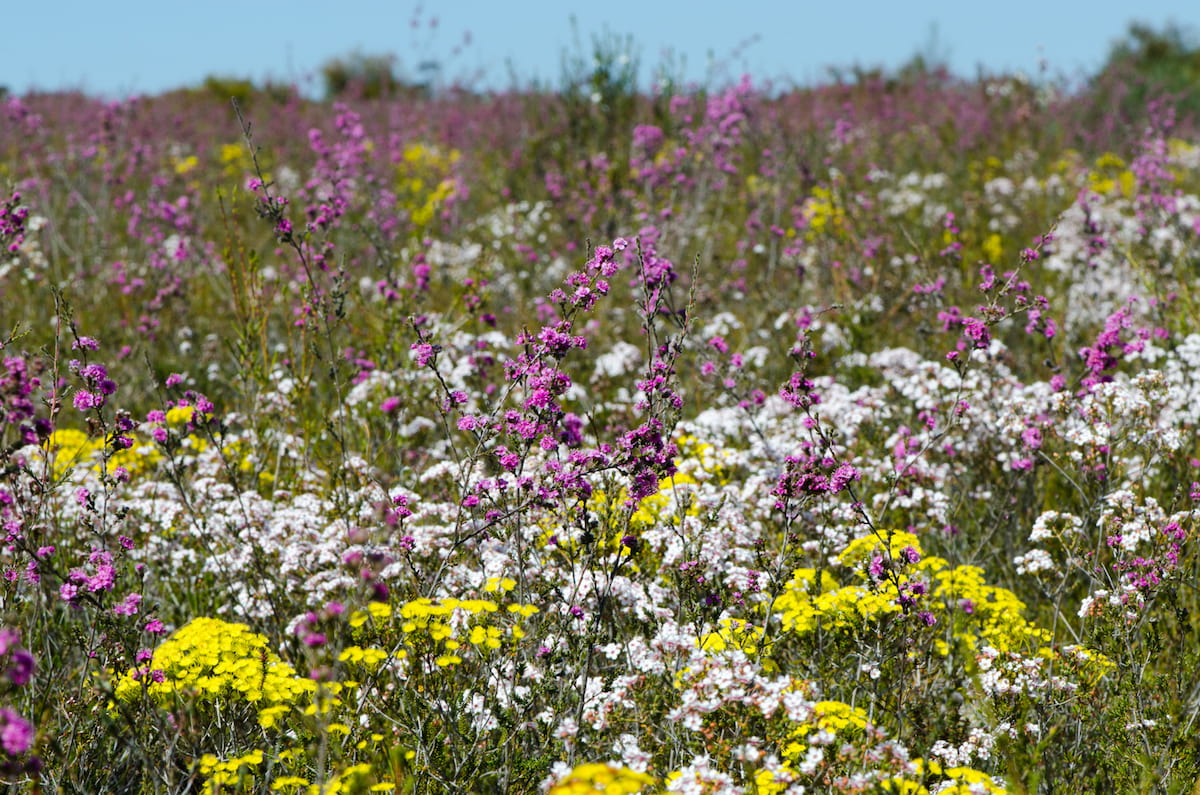 While kwongan is spectacular in a good wildflower season, some of the most amazing aspects of its plants are not readily seen. Many have evolved exceptional adaptations to the extremely low phosphorus levels in the soils where they grow, involving specialised roots and associations with micro-organisms.

Kwongan occurs now predominantly in scattered remnants, having been easily cleared for agriculture despite the sandy soils being of low productivity. Some extensive areas of kwongan occur within the Fitzgerald River National Park and smaller areas within the Stirling Range National Park. Outside the Great Southern region, there are also extensive areas within parks and reserves in the Esperance area and within the Great Western Woodlands.

Clearing for agriculture is not as extensive now, but the threats to kwongan now come from other sources. Proteaceous species are more fire sensitive than the eucalypt-dominated communities, lacking the lignotubers that allow mallees to reshoot after wildfires. With increasing intensity and frequency of wildfires through climate change, the risk is that the great diversity and complexity of kwongan will be lost as fire-sensitive proteaceous species are unable to regenerate.

Phytophthora cinnamomi and other plant pathogens have also wreaked havoc on proteaceous species, with Stirling Range communities being particularly hard-hit. The double-edged sword of fires and pathogens interacting is a major danger to kwongan, particularly in the national parks. 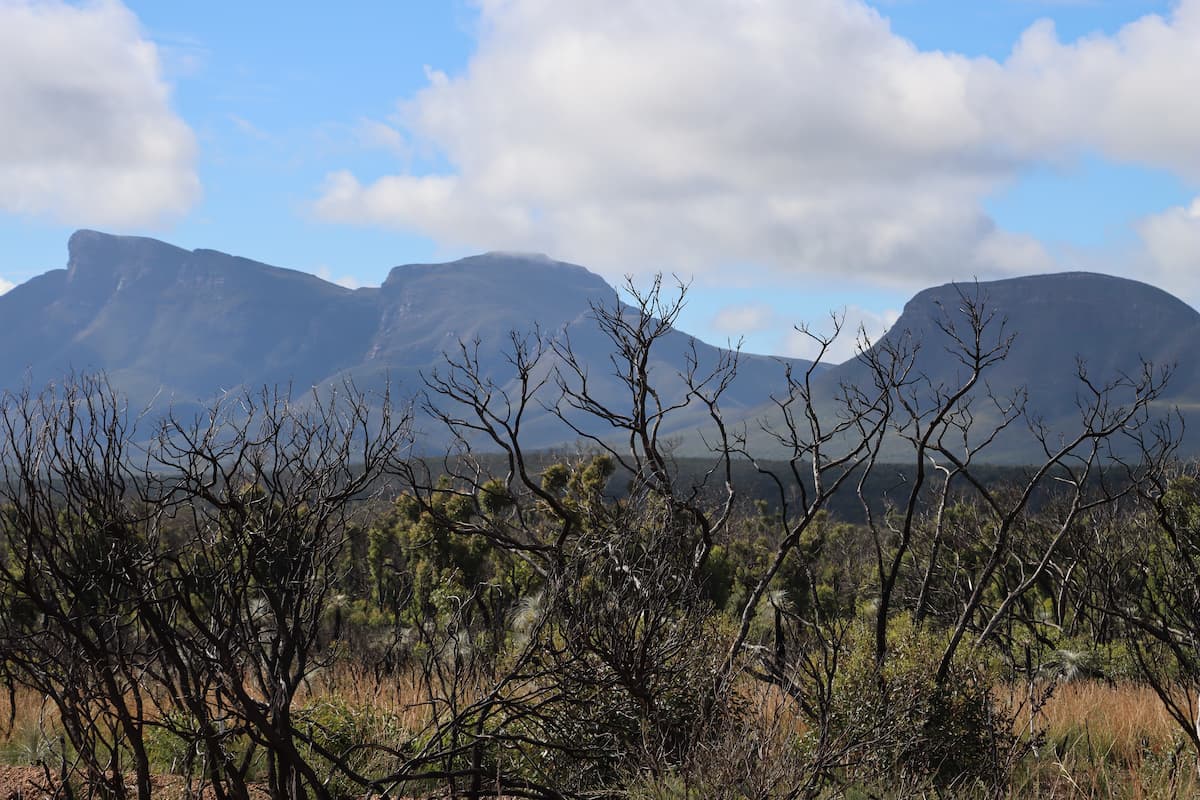 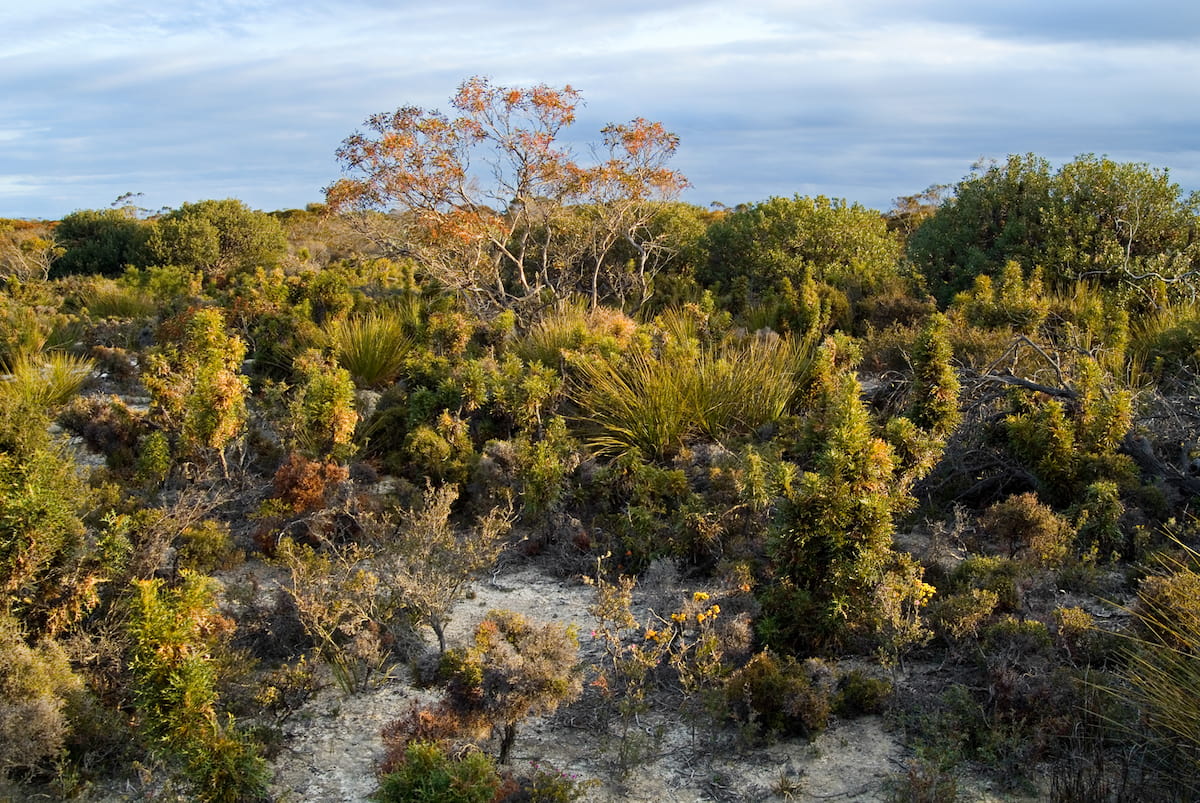 The smaller pockets of kwongan that still occur scattered throughout the south coast region also face other risks.

Those that are on deep sand may be destroyed by sand extraction for building.

Their fragility also makes them susceptible to destruction and subsequent erosion through vehicles or even by heavy pedestrian use.

Loss of more kwongan would not just reduce the plant diversity.

There are many fauna that are partially or wholly dependent on this community too, due to the availability of nectar and pollen across much of the year. These include honey possums, dibblers, heath mouse, western spinebills and western whipbirds. 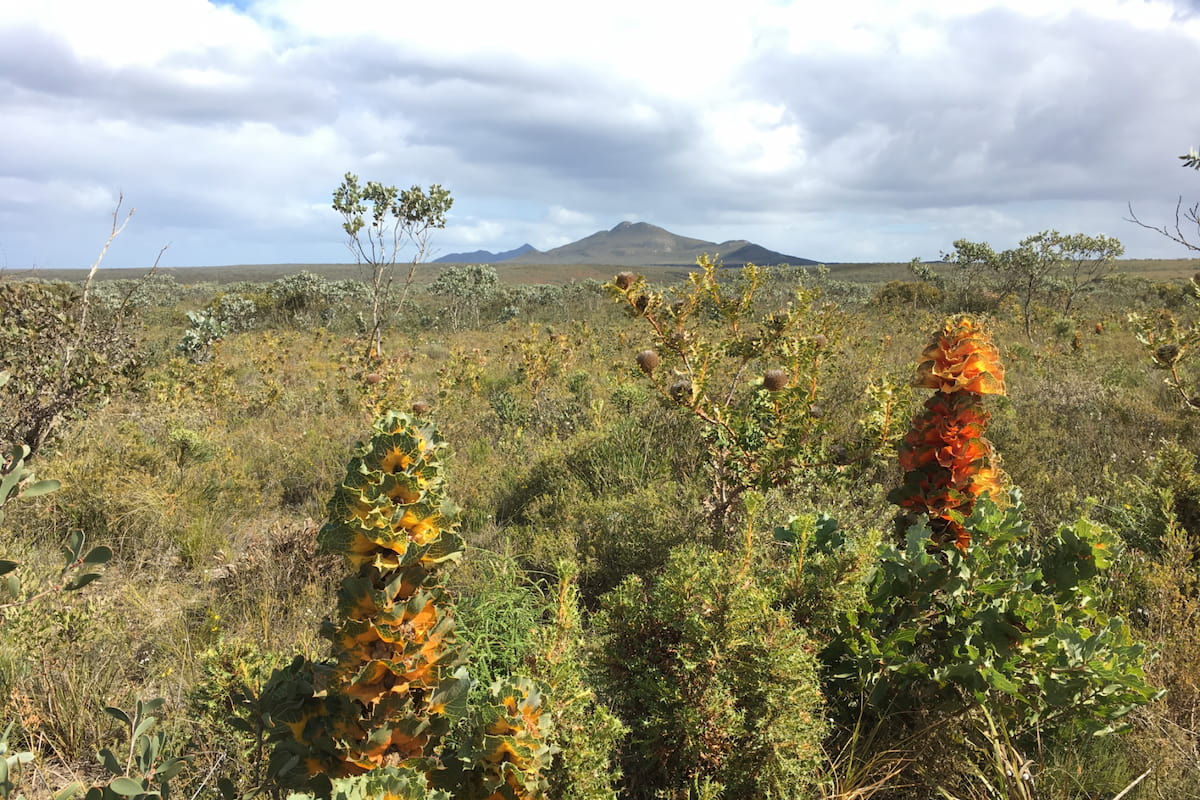 Sincere thanks to Paula Deegan for researching and writing this ‘Nature insight’.