From Binjellup (Sukey Hill) you’ll find a spectacular view of the western end of Koi-Kyeunu-ruff (or the Stirling Ranges), which rises abruptly from the flat plains. The first peak you can see is Toolyelup. Sukey Hill itself is actually an outlier of Koi-Kyeunu-ruff and the quartzite rock you are standing on is typical of the sedimentary rocks that make up the range.

To the north and east of Sukey Hill dotted amongst the farm land. It is believed these lakes have formed as a result of a blocking an original waterway and leading to an elevated saline water table.

At one stage in the 1990s it was predicted that much of the land north of Sukey Hill, and even the area around the town of Cranbrook, would turn salty as a result of farming practices that didn’t mimic the water use of the original bush. Improvements in farming practices and extensive landcare work appear to have reversed that risk, and today additional work is being undertaken to restore the conservation value of a number of these lake environments, including through fencing and rehabilitation plantings.

This place was known as Binjellup by the Noongar people and much later re-named Sukey Hill after William Sukey, a local shepherd from Pootenup, north-east of Cranbrook.

This scenic lookout is just a 10 minute drive east of Cranbrook, past bushland that features the Cranbrook Wildflower Walk. 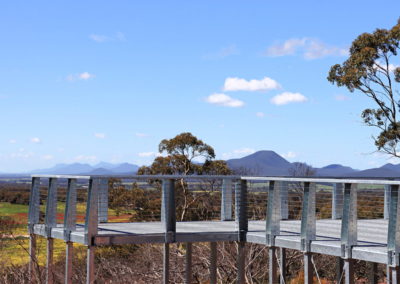 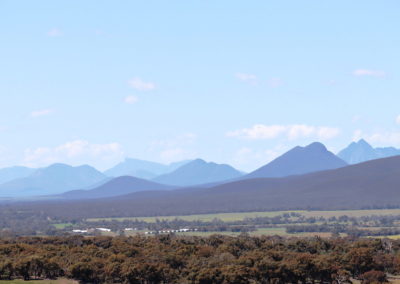 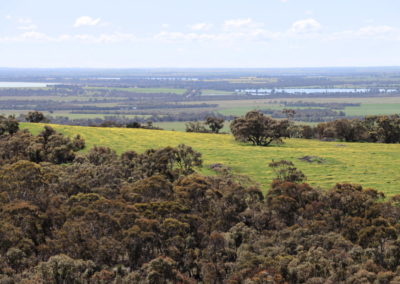 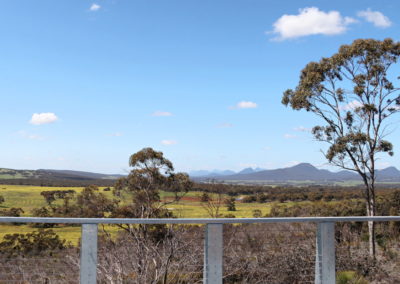 Noongar people know this range as Koi Kyeunu-ruff, a place of ever-moving mist and fog. Its immense cultural and spiritual significance is shown by this story from Noongar Elders Jack Williams and Averil Dean. Within the range, Boola Miyel (Bluff Knoll) is a particularly important place.

One of Koi Kyeunu-ruff’s most dramatic features are the cloud formations that can envelop the peaks completely.

For Noongar people, the mists are tangible evidence of the Noyt – spirits – of their people who have passed away. 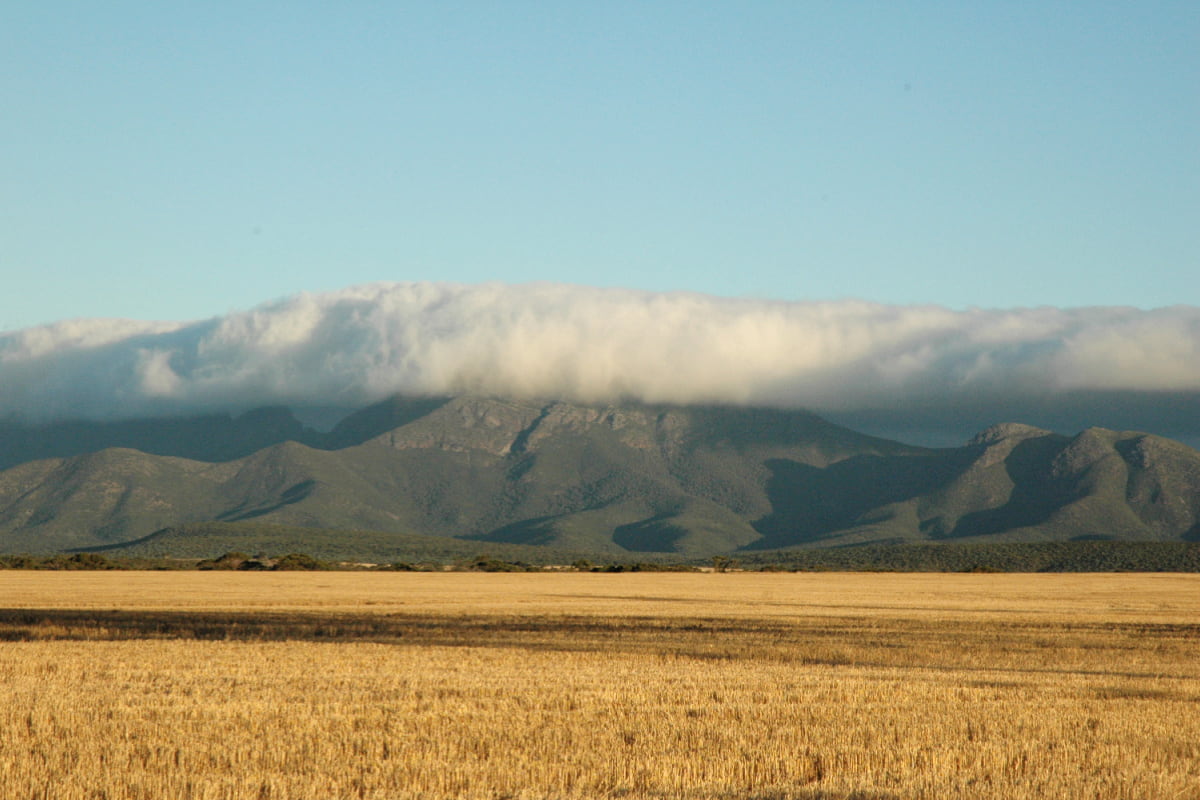 Sukey Hill is an outlier of the original Koi Kyeunu-ruff range, with Geekabee Hill to the west the final outlier.

The rocks that comprise both the hill and the Range were once beneath the ocean, laid down as sands and silts in the delta of ancient rivers around two billion years ago. Pressure from the weight of layers of sediment produced metamorphic sandstones, quartzites and shales. Some of the rocks still bear ‘ripple marks’ from being on the sea floor of that ancient delta.

This rock was then folded and formed into a mountain chain that rose high above the surrounding granite surface. Geologists consider this likely occurred around 1.8 billion years ago.

Koi Kyeunu-ruff (the Stirling Range) marks a geological and ecological boundary. To the north is the ancient Yilgarn Craton – at 2.8 billion years one of the most ancient geological plates on the Earth. It’s a relatively flat landscape, with large areas of mallee, a number of the large woodland trees that once grew across the wheatbelt, and a suite of salt lakes stretching north from Cranbrook.  Cropping is the main farming activity, along with some grazing, and one fifteenth century Dutch windmill. 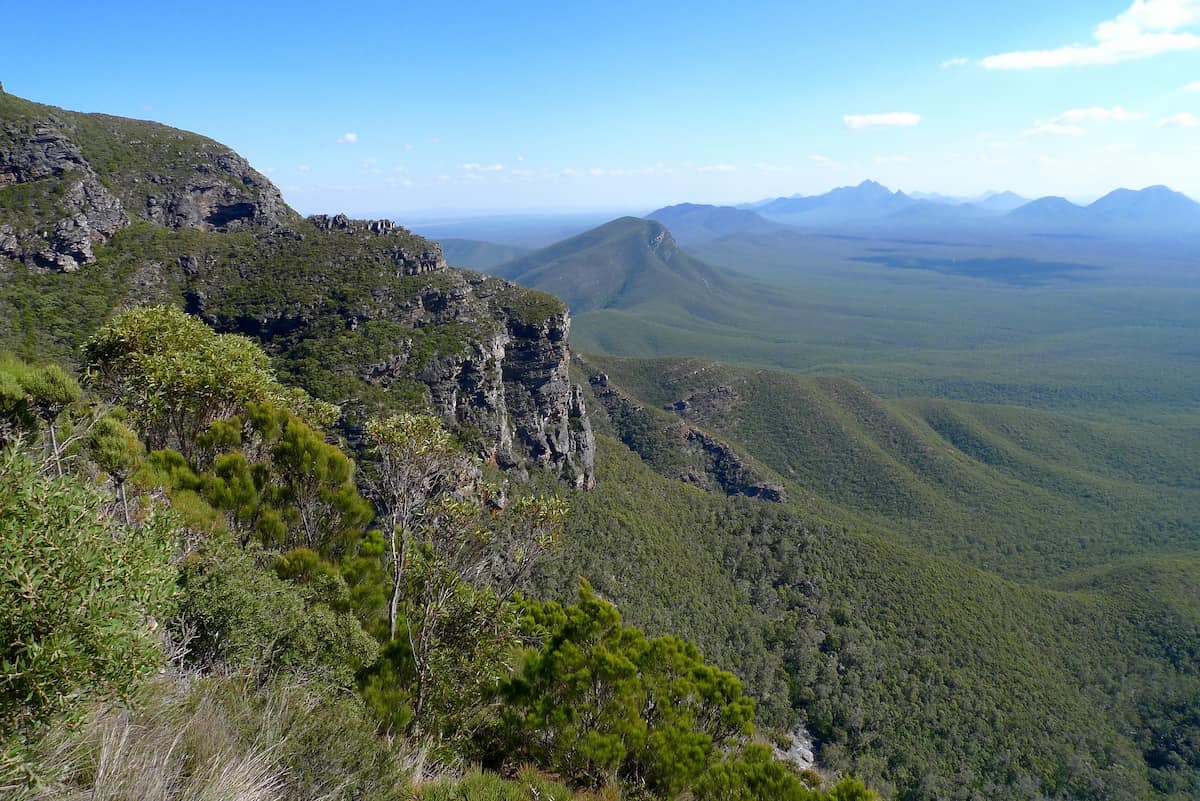 South of the range is a complex melding of rocks derived from the Yilgarn Carton and some magmatic event in a wide basin between the Yigarn Craton and other ancient rock shields to the south. It’s dissected by the Kalgan River and has a higher rainfall than north of the range. Soil types are more variable, reflecting the more complex geology. While there are large areas of mallee vegetation, and kwongan sandplain, the higher rainfall means it is not far to the south before the classic forest trees appear – Jarrah and marri.

The Kalgan catchment – west and south of Koi Kyeunu-ruff – has some of the botanically richest areas in south-western Australia, with even higher plant diversity than much of Koi Kyeunu-ruff National Park. This is likely to be a result of the more complex geology, and hence soils, and a melding of the climate zones.

The higher rainfall also supports a range of farming enterprises, that ranges from cereal crops, cattle and sheep grazing, viticulture and tree plantations. By contrast, north of the Stirling Range where the rainfall is less the vast wheatbelt area begins. At almost 18 million hectares this now covers much of south-western Australia, with only about 7% of the original vegetation remaining across this entire area.

The Range itself and some of the surrounds were reserved as National Park in 1913.

Some further areas of heathland surrounding the Park have escaped agricultural development, probably due to the presence of concentrations of ‘poison plants’. These are native plants, mostly of the Gastrolobium genus, that have naturally high levels of fluoroacetates, which  are toxic to non-native animals, including sheep and cattle.  Gastrolobium is now the basis of 1080 poison used to control feral animals like foxes and cats throughout south-western Australia.

Associate Professor Andrea Gaynor has written a candid environmental history of the Stirling Range National Park that outlines a number of the challenges facing the park, including the spread of an introduced water mould, Phytophthora cinnamomi, which is killing large areas of susceptible Proteaceaous plants (those we know as Banksias, Petrophiles, Isopogons, Hakeas and Grevillea) along with other plant groups like Xanthorrhoea, the grass trees.

In this time of climate change, wildfires and fire management practices are also severely damaging the natural and cultural values of the range.

Two community-based organisations play an important role in protecting and restoring wetlands and other important areas in landscapes to the north and west of Sukey Hill. The Gillamii Centre is the long standing landcare group based in Cranbrook and working with the farming community and others on a wide range of sustainable practices. Green Skills is based in Denmark and is a leading group in achieving the Forest to Stirlings section of the Gondwana Link.

Contact them directly to donate to their wonderful work or to get involved in citizen science investigations or ecological restoration activities. 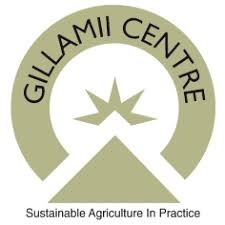 Take this 1.7km walk through predominantly wandoo woodland in spring and be rewarded by many beautiful flowers and a number of spectacular orchids.

Small but picturesque pink lake next to the road - there's nowhere to stop so admire it as you drive past on Great Southern Highway.

Known to the Noongar community as Dwangup, this is a very significant cultural site and a registered Aboriginal heritage site.

Balijup Farm has been farmed by the Hordacre family since 1923.

Nunijup is said to mean “place of many snakes” – a descriptive name back when this was a special meeting place for the Kaneang people of the Noongar nation.

From the Great Southern Highway travel along Salt River Rd for 3.2km and turn left on Sukey Hill Rd. The road up to the lookout is on the right.

There are limited facilities, but a new lookout structure will help you see the magnificent vista. 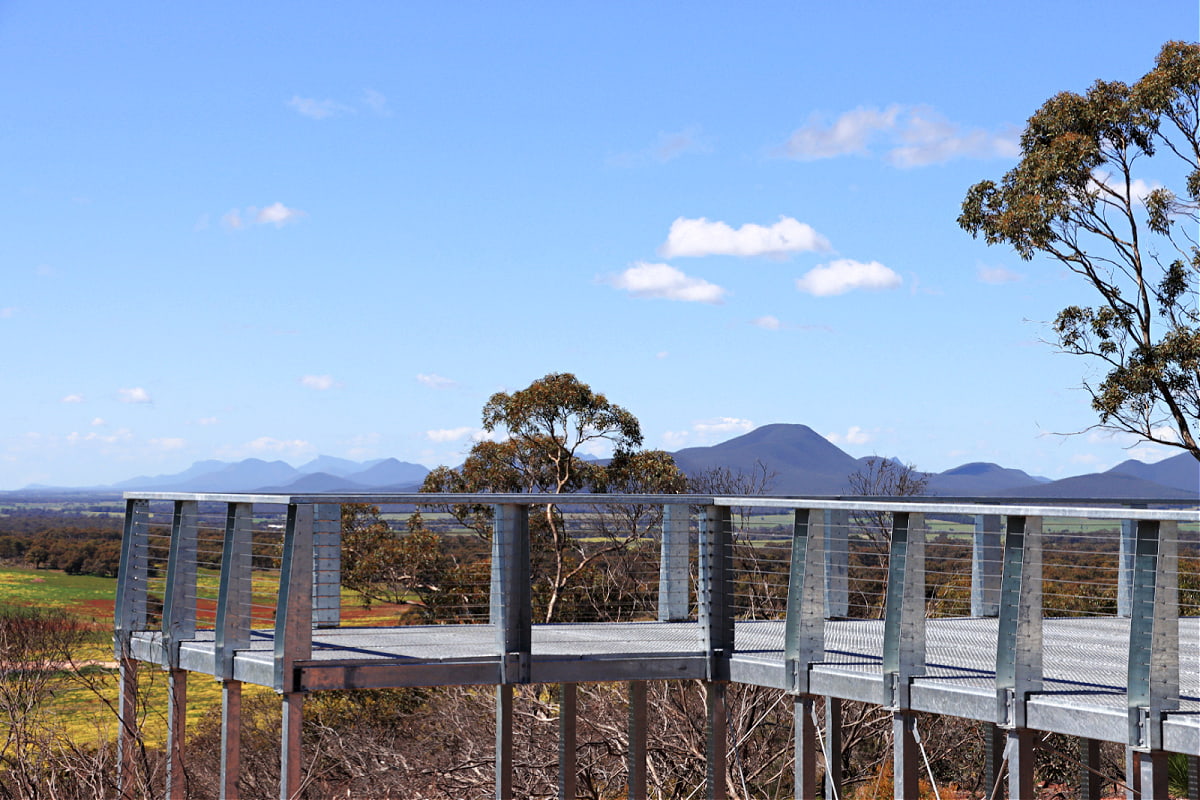